Prelude: The Raising of Lazarus

2020 Note: As I have reviewed the story of Lazarus that in the Gospel of John immediately precedes the Passion Week, I have been stirred by how the story of his miraculous raising speaks so strongly to us at a time when there is so much loss and grief. While the hope of a future resurrection provides some comfort, the story also tells us how we can be raised to new spiritual life in Christ now, even in the midst of our struggles. In 2018 I wrote, "Lazarus, a character who does not speak and is acted upon rather than acting, represents how all of us are recipients of grace and saving power if we obey his call. Although Jesus’s raising Lazarus from the dead prefigures our own certain future resurrection, as realized eschatology it also illustrates how each of us is spiritually dead until Jesus comes into our lives and calls us to new, spiritual life" (Becoming the Beloved Disciple, 101)


The raising of Lazarus is an appropriate prelude to a celebration of Holy Week, both because it foreshadowed Jesus’ own coming resurrection and because it seems to have been a major cause in the series of events that led to his arrest and death. While the cleansing of the temple appears to be one of the triggering factors that led to the arrest—and eventually the crucifixion—of Jesus in the Synoptic gospels, the gospel of John presents the raising of Lazarus as the proximate cause of Jewish leadership’s decision to try to put Jesus to death:


But some of them went their ways to the Pharisees, and told them what things Jesus had done.  Then gathered the chief priests and the Pharisees a council, and said, “What do we? for this man doeth many miracles.  If we let him thus alone, all men will believe on him: and the Romans shall come and take away both our place and nation.”

Death shall not destroy my comfort,
Christ shall guide me through the gloom;
Down He'll send some heav'nly convoy,
To escort my spirit home.

See the happy spirits waiting,
On the banks beyond the stream!
Sweet responses still repeating,
"Jesus! Jesus!" is their theme.

The Background of "Lazarus Saturday"


In the Eastern Orthodox tradition, the Saturday before Palm Sunday is celebrated as “Lazarus Saturday” (although because most Eastern churches follow the Julian calendar, the events from Lazarus Saturday up through and including Easter usually fall on a later date than they do in the West). This feast celebrates Jesus’ power over death as it was so powerfully demonstrated in his calling Lazarus forth alive from his grave in Bethany.  In actuality, it is not clear how many days before the Triumphal Entry the raising of Lazarus actually took place: the gospel of John records that Jesus withdrew from the public eye to a village called Ephraim for some time before Passover (John 11:54), after which occurred the dinner at which Mary of Bethany anointed Jesus’ feet.   Still, the story of the raising of Lazarus serves as a fitting starting point to our celebration of Holy Week.
The revival of Lazarus is the third example of Jesus raising the dead in the gospels, and it is also the most powerful.  When Jesus raised the daughter of Jairus, she had just died, having passed away as Jesus was making his way to heal her of her sickness (see Mark 5:21–24, 35–43; par Matthew 9:18–19, 23–26; Luke 8:40–42, 49–56).  The son of the widow of Nain had been dead longer; Jesus intervened in this case while the young man’s body was being carried to burial (see Luke 7:11–17).  But Lazarus had been dead and in his tomb for four days when Jesus arrived to revive him.  This miracle thus conclusively displays Jesus’ absolute power over death.

While all three of these cases certainly anticipate Jesus’ own coming forth from the tomb Easter morning, they are only examples of Jesus’ restoring people to mortal life, not of actual resurrection.  This is perhaps most vividly demonstrated by the fact that Lazarus comes out of the tomb “bound hand and foot with graveclothes: and his face was bound about with a napkin” (John 11:44).  The Greek word soudarion, meaning “handkerchief” or in this case “facecloth” (KJV “napkin”), is the same word used in the case of the Jesus’ grave clothes left in the empty tomb on Easter morning (see John 20:6–7).  Lazarus brought his grave clothes out of the tomb with him because, as a mortal, he would still need them for one day he would die again.  Jesus left his grave clothes in the tomb, however, because he had risen to immortal, eternal life.

In addition to the stunning miracle itself, the story of Lazarus also occasions an important Johannine dialogue, in which Jesus taught Martha how he was the Resurrection and the Life (John 11:20–27).  Regarding this discourse, I have written the following in my forthcoming book on miracles:

Jesus’ famous proclamation that he was the resurrection and the life that followed anticipated more than just the miracle that he was about to perform in raising Lazarus from the dead.  It also looked forward to the glorious resurrection that his own conquest of death would make possible: “He that believeth in me, though he were dead, yet shall he live” (John 11:25).  Lazarus, a disciple who had died, would soon live again.  Yet all who believe in Jesus will also live again, and more than that, they will live forever.  But when Jesus taught Martha that those who believed in him would live again, he was not just referring to the general resurrection.  All who die will be restored to their bodies.  In his Discourse on the Divine Son soon after the healing of the man at the Pool of Bethesda (John 5:17–47), Jesus had taught that all would come forth from their graves, “they that have done good, unto the resurrection of life; and they that have done evil, unto the resurrection of damnation” (John 5:29, emphasis added). Thus when Jesus referred to believers living again, he probably meant that they would rise in “the resurrection of life,” receiving glorified bodies and eternal life, usually defined as the kind of life that God and Christ have in their presence.


With that in mind, however, the next verse presents somewhat of a conundrum: “And whosoever liveth and believeth in me shall never die” (John 11:26).  Lazarus had believed in Jesus, yet he had died, as countless of believers in Christ have died since.  Clearly when Jesus spoke of believers never dying, he must have been referring to more than just physical death.  Indeed, in the gospel of John “life” is defined very broadly as the kind of spiritual life that one enjoys, in this life or the next, when one has been reborn in Jesus and enjoys his spirit.   Death, then, represents living without God’s spirit, which death believers lastingly overcome with their faith in Jesus even before the general resurrection.  In other words, even if we temporarily die in regard to our physical bodies, those of us who are alive in Christ never spiritually die. (The Miracles of Jesus, 115–16)

The story of raising of Lazarus thus not only points us towards the resurrection by which Jesus conquered physical death, it also symbolizes his conquest of spiritual death, or our separation from God in this life and the next.

Because the miraculous resuscitation of Lazarus probably occurred several days before the Triumphal Entry, and the Bethany dinner and anointing by Mary preceded it as well, my friend Maxine Hanks has suggested that another possible sequence for individuals or families desiring a "head start" to Holy Week could be to observe a "Lazarus Friday" followed by a "Bethany Saturday" before Palm Sunday

2020 Note: Because of hoarding during the Corona virus pandemic, we were not able to buy any years this year, so all the pictures are from previous years.

One of the fun Eastern Orthodox customs associated with with Lazarus Saturday is the baking and eating of Lazarakia, small holiday rolls in the shape of a shrouded figure. Here is a recipe and directions for making your own lazarakia: http://www.orthodoxmom.com/2009/04/10/lazarakia-recipe/

Our first attempts at making this holiday roll: 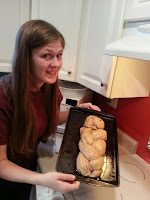 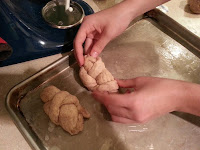 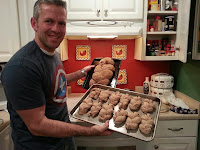 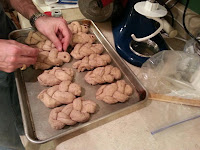 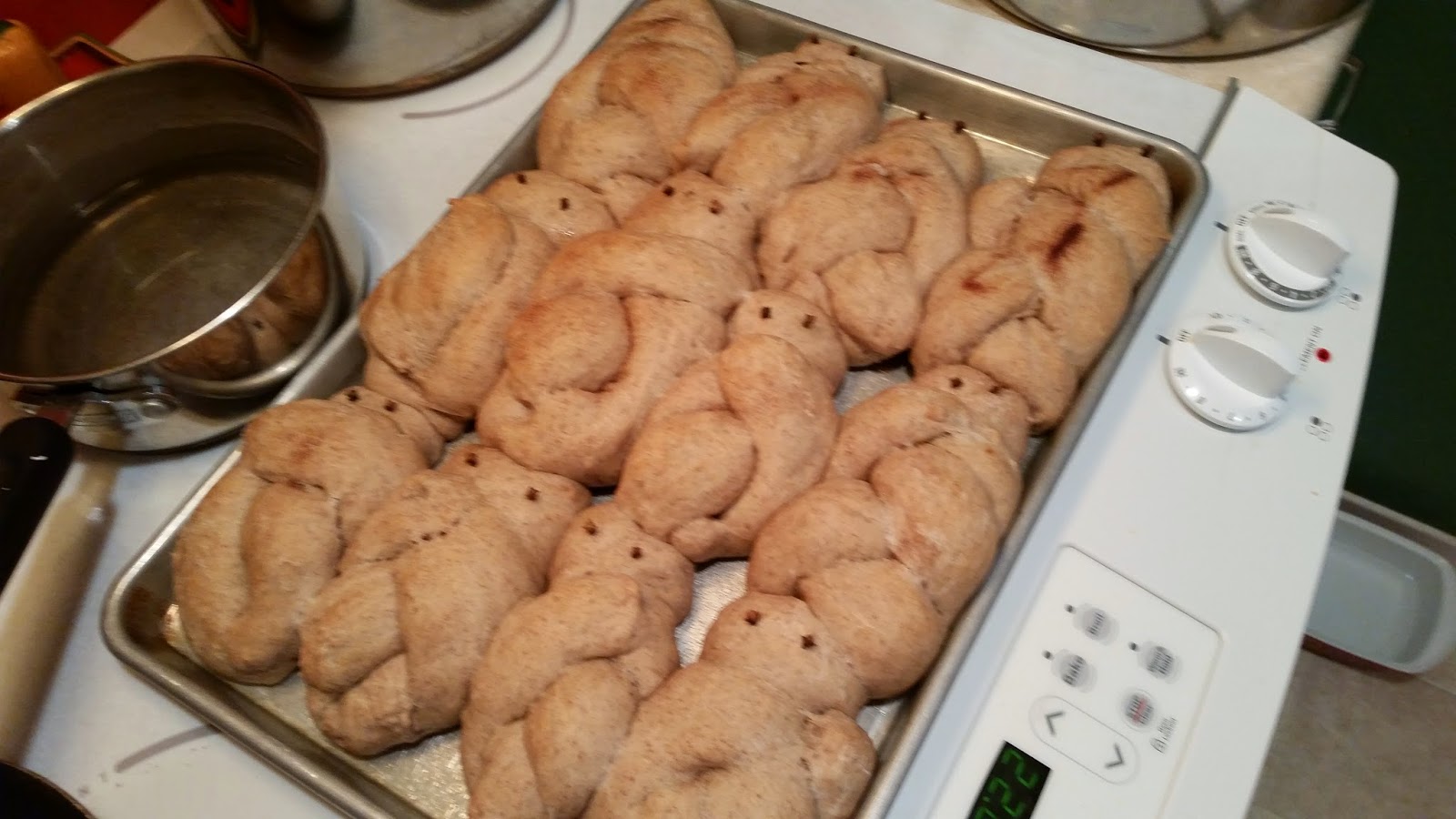 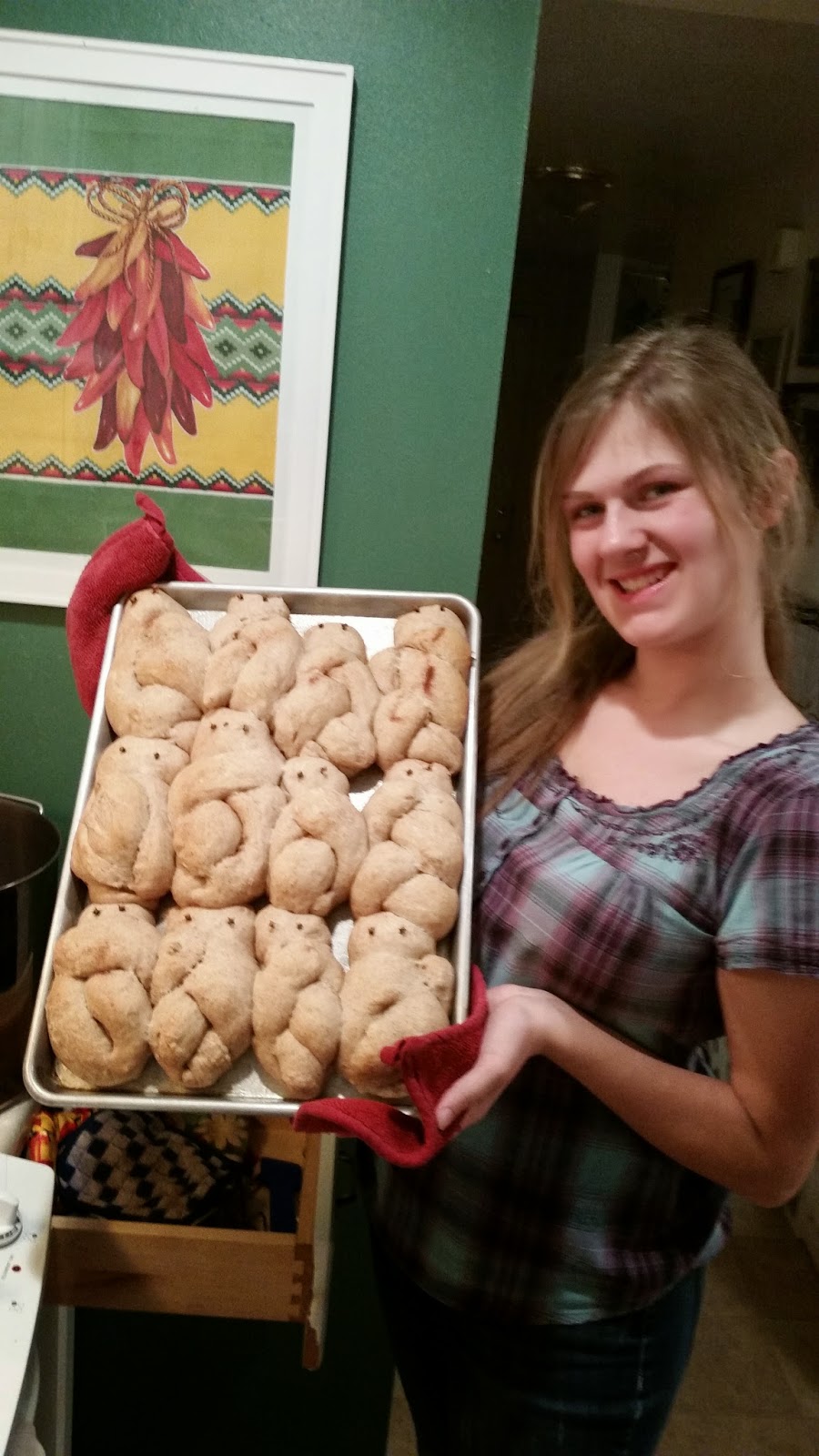 Ideas for Celebrating Easter  | A Working Chronology  |  The Raising of Lazarus | The Symbolism of Jesus as Anointed King and Priest: The Anointing in John