Taken from Good Tidings of Great Joy: An Advent Celebration of the Savior's Birth, 16-17.
For other Christmas ideas, see the page "Preparing for Christmas" 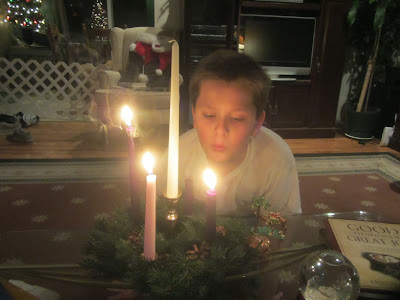 “When I was very young and living in East Germany, Christmas in our family began four weeks before Christmas Eve with the beginning of Advent. We made a fresh cut wreath from a fur or a spruce and put four candles on top of it and placed it on our kitchen table. On the fourth Sunday before Christmas, we lit the first candle. Then each night until Christmas, my family gathered around the table and sang Christmas songs and listened to Christmas stories. . . . Advent was a time of anticipation and hope and it brought a special feeling into our humble home as we prepared for something holy and beautiful. Each Sunday we lit one additional candle, by the fourth Sunday our expectations for the coming joyous events had reached their peak." (Dieter F. Uchtdorf, address delivered at First Presidency’s Christmas Devotional, Salt Lake City, December 2008, transcription of audio; available at http://lds.org/library/display/0,4945,8450-1-4729-1,00.html)


As part of preparing for Christmas, Christians from some backgrounds observe a custom called Advent. This observance takes its name from the Latin term adventus, which means "coming" or "appearance."  As such, Advent is a way that some choose to celebrate the coming of Jesus into the world at his birth; focus on his presence in their lives now; and look forward to his return in glory in the future. Whether gathered in church or at home, those who observe Advent today use the Sundays leading up to Christmas to prepare themselves through scriptures, music, and other traditions. While Advent is not a regular part of LDS practice, individual families, such as ours, have found that incorporating some aspects of it into their own traditions at home can be a wonderful way to keep the Christmas season Christ-centered.

Advent was originally a solemn, preparatory period before newly converted Christians were baptized on January 6. That day was selected for such baptisms because it was the day, particularly in the East, that commemorated Jesus' own baptism. Perhaps because of that date's proximity to Christmas, Pope Gregory the Great (A.D. 590-604) later established Advent as a period of preparation anticipating the Feast of the Nativity, a period that he set as beginning on the fourth Sunday before Christmas. While the Reformation later led some Protestants to stop observing Advent, Martin Luther, who loved the Christmas season, felt that it was still a useful way of teaching children and families more about the importance of the coming of the Babe of Bethlehem. As a result, Advent continued to be particularly important in Germany, from where many of its customs have spread.


In the German tradition, Advent is often anticipated by the strains of Wachet auf, ruft uns die Stimme, a Lutheran hymn composed by Philipp Nicolai in 1598 that is based upon the Parable of the Ten Virgins found in Matthew 25:1–13. The idea is that as we move into the Advent season, we should be like the five wise virgins, who are prepared and watching with lamps trimmed. Perhaps its most famous setting is by Johann Sebastian Bach, whose cantata featuring it was first performed on November 27, 1731 on Trinity XVII, the last Sunday of the liturgical year right before Advent.

An English translation of its lyrics include the following lines:

Awake, calls the voice to us of the watchmen high up in the tower;
Awake, you city of Jerusalem.
Midnight the hour is named; they call to us with bright voices;
Where are you, wise virgins?
Indeed, the Bridegroom comes; rise up and take your lamps,
Alleluia!
Make yourselves ready for the wedding, you must go to meet Him. 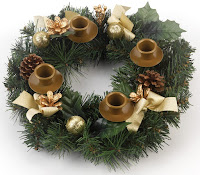 Perhaps the best known Advent custom is the lighting of the candles in an Advent wreath, a simple or decorated evergreen wreath with four candles placed in the circle and sometimes with a single white candle in the center.  [For a basic wreath to order online, see https://www.amazon.com/Traditional-Pine-Cone-Advent-Wreath/dp/B001AYECU4] 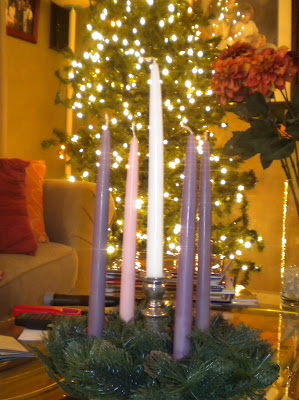 In 2002, our family decided to incorporate Advent into our own Christmas traditions, and it became a particular favorite of our daughter, Rachel. She was five at the time, and I remember how much I enjoyed explaining to her the symbolism of the small wreath that we had purchased, describing how the wreath represents the never-ending circle of God's love, showing that he is the same forever in his love toward his people. The green of the wreath, as in the Christmas tree, represents the hope of eternal life that comes through Christ and serves as a reminder of the freshness of God's love and promises. The light of the candles reminds us that Jesus is the Light of the World, that his birth represented the coming of that light into darkness, and that we are called to reflect that light in our lives.

Traditionally the four candles of an Advent wreath are purple, the color of royalty, although one is sometimes pink or rose-colored. We decided to include the central, white candle in our wreath, which we light on Christmas Eve and again on Christmas Day. Each Sunday before Christmas an additional candle is lit, creating a beautiful stepped-effect as the previous weeks' candles burn down farther. After lighting each candle, we take turns reading scriptures that illustrate Advent themes, which we draw from the Book of Mormon as well as from the Old and New Testaments. After singing a carol, we have family prayer and then proceed to more fun traditions, like opening the day's pocket in our Advent calendar and enjoying a treat together.

Traditions differ regarding the symbolism of the candles, but a common one is that they represent the hope, love, joy, and peace that come through Jesus Christ. In weekly posts I will share ideas for scriptures, songs, and other customs that families can use on the four Sundays of Advent as well as some that they may incorporate into their Christmas Eve traditions.

Each weekly Advent post will be divided into sections.  The first section, The Promised Advent, will review prophecies of the nativity of Christ.

Then in a section called On The Eve of His Coming we will then bring the story into the gospels by reflecting the experiences of Zacharias, Mary, Elisabeth, and Joseph as they witnessed the realization of these prophecies.  For each of these vignettes I have included pictures of the sites in the Holy Land where, by tradition, they are believed to have occurred. The following video collage gives a foretaste of what these are like:

The next section will then reflect upon how Jesus fulfills that day's Advent theme, whether it by Hope, Love, Joy, or Peace.

The final section, Looking Forward to Christ's Second Advent, will consist of a scripture looking forward to Jesus' promised Second Coming and the blessings that will be realized at his return.

I also frequently feature special music for Advent. Some, such as "O Come, O Come, Emmanuel," are almost always Advent, but many customary Advent hymns are not as familiar now. As a result, even though some traditions reserve Christmas carols for Christmas Eve and the twelve days including and following Christmas, I have selected many familiar Christmas songs that nonetheless accord with the theme of each Advent Sunday.

At the end of the season I will then reflect on the the focus of Advent, salvation, by considering Book of Mormon prophecies of Christ.  Finally, I will consider how we can keep the spirit of Christmas alive throughout the year.